BlenderExpert is reader-supported. If you buy via the links here we may earn an affiliate commission at no cost to you, learn more.

In its price range, the Hamilton Beach Hand Blender is one of the best. This is one of the best immersion blenders and will allow you to do all the things you normally do with a blender in your cooking pan or glass instead. This includes blending drink mixes, making smoothies, pureeing vegetables and mixing dough.

Most models of the blender come with a whisk, as well, which only adds to the versatility of this blender.

In addition to its convenience, the Hamilton Beach Hand Blender is simple and straightforward to use and to clean. It features a contoured handle that is easy to grip and does not slip, and attachments that attach and detach easily. These blenders have a long cord that only adds to the times and places you can use them.

The most basic Hamilton Beach 2 speed blender, model 58725, features an easy-grip handle, nonslip speed control and an extra-long 5 foot cord. The next model, the 59770, adds a stainless steel whisk attachment and blending wand to the mixing options.

hite and the 59785 in black, add a convenient carrying case and 200 watts of power, for all your blending needs.

These hand blenders are perfect for blending small amounts or making smoothies, adding drink mixes to liquid, and even mixing a few drinks.

Since you don’t have to get out your mixing bowl and blender or power up the stand mixer, the Hamilton Beach Hand Blender is more convenient than other types of mixer.

This blender also comes with two speeds, making it more versatile that some of the other hand blenders on the market. The two speeds give you more control over the mixer’s power, giving you more options when you’re blending.

Additionally, the blender’s 200 watts of power mean that it can take on some of the more heavy-duty jobs that some hand blenders cannot handle.

While the manufacturer does not recommend using it to chop ice, some users report using it this way consistently with a lot of success. Having 200 watts of power at your disposal means this blender can replace your larger mixer for most jobs.

In addition, the Hamilton Beach Hand Blender can collect food in a couple of different places, including the top of the attachments and inside the handle casing, making the blender difficult if not impossible, to clean and unsanitary to use.

In its price range, this blender is one of the best. Its 200 watts of power make it more powerful that some of the other hand blenders in its class, thus making it useful for blending things like smoothies that are beyond the reach of some other hand blenders.

While the blender does not have all the features, power, and construction of some of the more expensive hand blenders, for occasional use it can’t be beat.

As professional Baristas, Angela & Brian are always making great efforts to adopt a healthier, more balanced lifestyle. They love to make smoothies and shakes using a high performance blender, and this blog is where they post the latest blender recipe creations. Enjoy your stay here, and feel free to contact us with any questions. 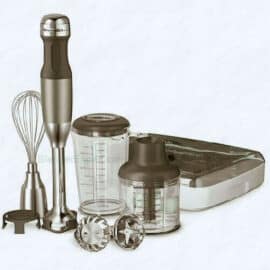 What’s The Best Hand Held Blender On The Market Today? 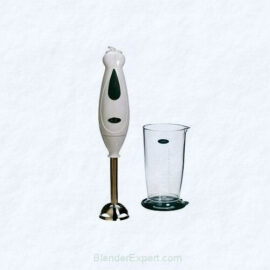 BlenderExpert.com is a participant in the Amazon Services LLC Associates Program, an affiliate advertising program designed to provide a means for sites to earn advertising fees by advertising and linking to Amazon.com. As an Amazon Associate we earn from qualifying purchases. Amazon and the Amazon logo are trademarks of Amazon.com, Inc, or its affiliates.